As the TT festival fortnight came to a close the Caterham 7 reached 2000 miles on the odometer. So what's been happening?

The weather over TT hasn't been the best with wind, rain and a generally poor two weeks. Such weather had a knock on effect with the TT road closures and that limited the amount of fun available when driving the 7 even when the weather did clear up.

This last weekend was different, glorious sunshine bathed the island and that provided a final opportunity to drive the Mountain road section of the TT course in its one-way format. Driving the Mountain road during TT while one way with no speed limits is always a fun experience, but this year was the first time in the 7 and it didn't disappoint. On Sunday alone I managed a total of 3 laps of the circuit and a tank of fuel, loving absolutely every minute of it.

The one-way system during TT has become quite the attraction as it provides an opportunity to legally stretch the legs of both cars and bikes. This year attracted one of the best supercar contingents to date. Take a look at the video below, can you spot the Senna!

Wife enjoying the drive? Maybe it's the tight line.
Here's the full image taken at Gutheries

On that first lap, with two occupants in the car I became aware of a harsh scraping or rubbing noise as we drove through the Gooseneck which is the corner shown in the above video. The noise was rather alarming and only stopped when the turn was completed. It's not a noise I've experienced before and seems to require moderate speed, a bend of 90 degrees or thereabouts, plus an incline or decline in the road. I suspect whatever caused the noise has been present from the outset, however, the car rarely has two occupants when driven quickly and so it's limited the scenarios for the issue to occur.

Of course it's been a point of concern over the last few days, and I've turned to Blatchat and Caterham Cars to try and identify the cause.

I received lots of helpful support and advice from Blatchat via a thread, I've linked that below.

Under suspicion first was the exhaust, which can at times make contact with the road. I examined my exhaust, both the silencer barrel and the tip, neither showed signs of damage. Just to be sure I've fitted two extra spacer washer on top of the hanger bobbin but beneath the exhaust bracket. Doing so has lifted the exhaust by a few millimetres, this should help reduce the potential for such contact.

Posters on BlatChat suggested I check the rear arches and cycle wings, something I'd already done, there were no signs of contact on either the fibreglass or tyres.

BlatChat contributors then suggested I check the DeDion tube fouling against the alloy wheel rim. This was something entirely new to me and not something I'd even considered. I investigated the suggestion and I did find evidence of contact, markings were present on both the rim and the DeDion tube as shown in the following images. 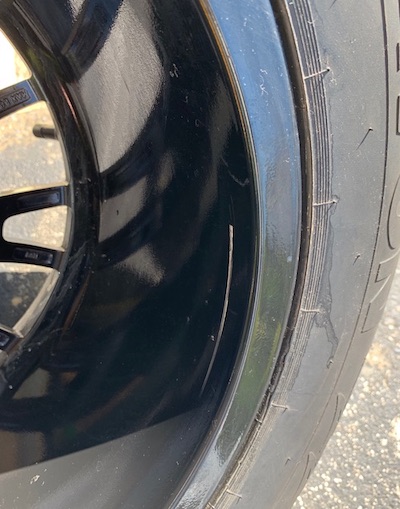 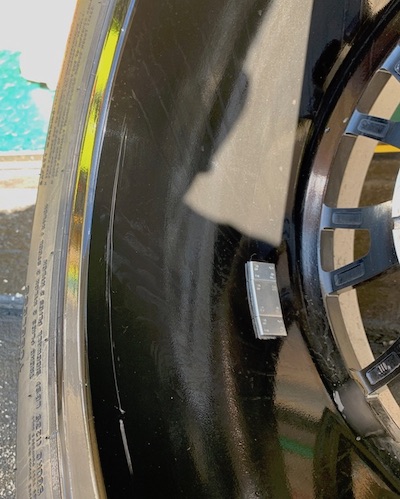 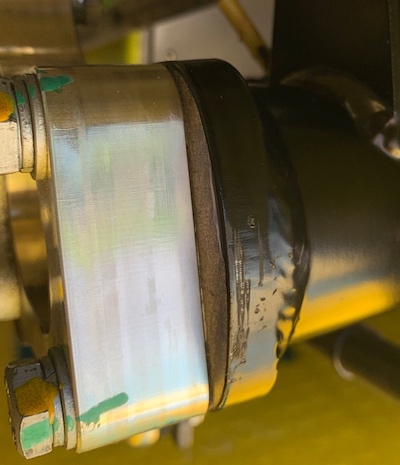 The BlatChat thread sparked some debate over whether such markings were related to the noise and further what the appropriate course of action should be.

In one camp members felt the markings were representative of the Dedion tube making contact due to various components flexing, apparently a known issue with the 13x8" Apollo wheels. Others stated it was merely as a result of road grit getting trapped between the tube and wheel rim. As you can see in the following image, clearance between the tube and alloy wheel is minimal.

Clearance between the Dedion tube and alloy wheel, not much!

Those that felt the tube and wheel were making contact without grit suggested grinding the tube down to increase the clearance. Although I do own a grinder I don't feel confident with the tool, certainly not enough to be removing metal from an integral suspension component. I wasn't sure which way to go, so decided to contact Caterham Cars via email and request their input on the matter. Caterham stated the 13x8" wheel was fine, it was in fact the setup used in the 420R championship. Caterham also clearly stated I shouldn't grind the DeDion tube! In their view the scoring or marks present on both the Dedion tube and wheel were as a result of road grit and an unfortunate side effect of the minimal clearance present, however it was nothing to worry about. So what was the cause of the noise?

During the BlatChat post and subsequent email conversation with Caterham I'd mentioned my rear ARB was running the lower and softest drop link hole, this was done to be more compliant on the bumpy Manx roads. Blatchat posts then suggested removing the ARB and testing, but nothing more specific. Caterham however did imply there might be a configuration issue with the softest setting.

"Try it one up from that and/or lengthen the link rod. Something along the way has changed which means that in the race application, in the softest setting (rarely used) it can touch the driveshaft. See if that’s the case."

I took the advice from Caterham on-board, and raised the drop links one hole. Altering a drop link is pretty straightforward. Jack the rear of the car up, and place on axle stands, then remove the rear wheels. Rejack under Dedion tube triangle, and lift the suspension a little to take tension off the drop links. Rather than try and force a spanner between the ARB and drop link, first lift and remove retaining pin from the ball joint. Once removed split the joint by placing a large screwdriver between the ARB and drop link and separate. This will allow easy access to the nut and square section behind the ball so that it can be unbolted and moved. It's then a case of reversing the process to refit, pack some grease in the ball joint socket to reduce friction and wear.

Once I'd moved the drop links up a hole I took the car for a test drive, and I have to say it felt better, though this might just be a placebo effect. The handling of the car and specifically the rear felt more taught and didn't shudder over rough bumps. It also felt more confidence inspiring when loaded in a corner. Throughout the test drive I was also unable to reproduce the original noise no matter how hard or tight I drove around similar turns.

Has moving the drop link solved the issue? Well, to be honest, I'm not entirely sure as the test drive was only myself and I need a second occupant to load the suspension with additional weight and reproduce the original test conditions. It is looking positive though, the current thinking is that drop link was too low and might have caught the road surface as shown by the scratches on the outer edge (discovered during the drop link change) see image below.

Sadly bad weather has once again returned to the UK and Isle of Man, this time with an amber weather warning for floods. Use of the 7 is thus limited, as soon as the weather improves I'll continue testing with a passenger and follow up with the outcome.

I'll be testing some new ear plugs/defenders, plus trying my first oil and filter change. I appreciate the car doesn't need it having had an oil change at Oakmere 1000 miles ago, but I simply wanted to give it a go given the dry sump system. Plus it's an excuse to try out my new purchase!